With the early access launched of both Industries of Titan and Phantom Brigade, the Brace Yourself Games Discord has seen a lot of growth. At the end of October, we put out a survey to our Discord to get feedback on how we’re doing. We figured you might be curious about the results as well as what actions we’re going to follow up with. A big thanks to everyone who submitted feedback!

We had a pretty even number of responses from fans across our games. Among the responders, 43% are fans of Crypt of the NecroDancer/Cadence of Hyrule, 41% are fans of Industries of Titan, 41% are fans of Phantom Brigade, and 3% are fans of BYG-TV and Clark Tank. This makes us pretty confident that we’ll be able to make good adjustments for each part of our Discord! We’ll be covering feedback on @-mentions, moderation, channel organization, community events, and emotes/stickers. So let’s dive in.

Regarding @-mentions, 78% of users say that the current amount of pings are good. Surprisingly though, 11% actually want to be pinged more. Because of these numbers, we’ll try to ping a little more here and there, but will probably keep it around the same.

For the 6% of you who say there are too many pings, and 5% who say that even 1 ping is too many, did you know you can customize your Notification settings by right clicking on a server icon and selecting Notification Settings? You can even adjust it to apply to specific channels. The last thing we want to do is annoy you with too many pings and notifications. This is an area where it’s hard to please everyone, so we encourage you to personalize your settings. 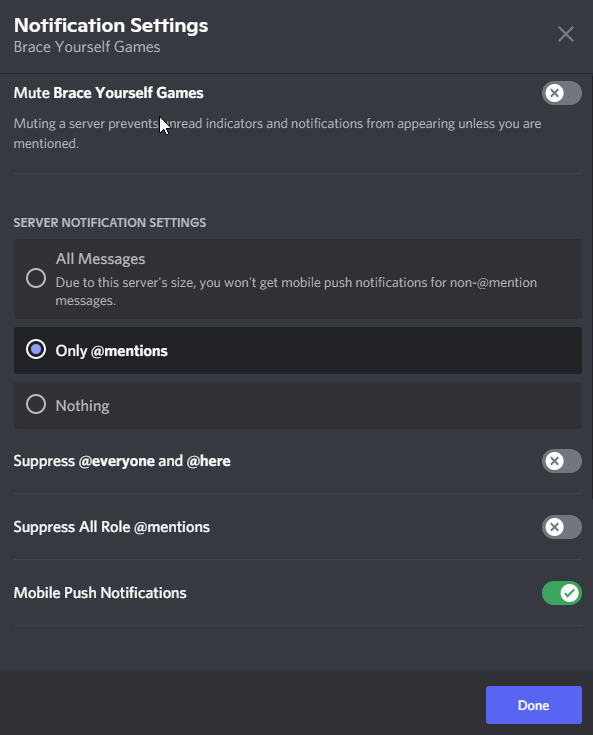 Another comment that we received is that it feels like moderators are active in the Titan and Phantom parts of the Discord, but less so in NecroDancer, so we’ll start looking for a new moderator to join our team in the new year who has a keen interest in NecroDancer!

Now to the meatier part of the feedback. In this part of the survey, we asked our users if there were any channels that they would like to see that aren’t there, or if they had any other feedback. There are two sides of clashing feedback here. The first is that there are too many channels, and the Discord feels a little cluttered. The other is that there are a number of specific channels that users want added. What we’re going to do is remove or consolidate less used/redundant channels, add some of the highly requested channels, and reorganize a little bit.

One of the most mentioned things in the survey was that people wanted more community events and contests, so we’re going to look into doing more Discord events – maybe things like Gartic Phone nights! We are always open to suggestions here.

Lastly, folks really want more emojis and stickers. So we’ll make some, but because people also want contests, we would also like to host some contests to add emojis to the Discord. Keep your eyes open for that.

We also do art livestream every now and then, so those are some cool opportunities to request specific stickers and the like. We’ve already added a few, but always feel free to request more!

There were more pieces of feedback here and there, but hopefully these changes will be a good start. Changes will begin to be implemented over this week. Thank you all so much again for sharing your voices with us!