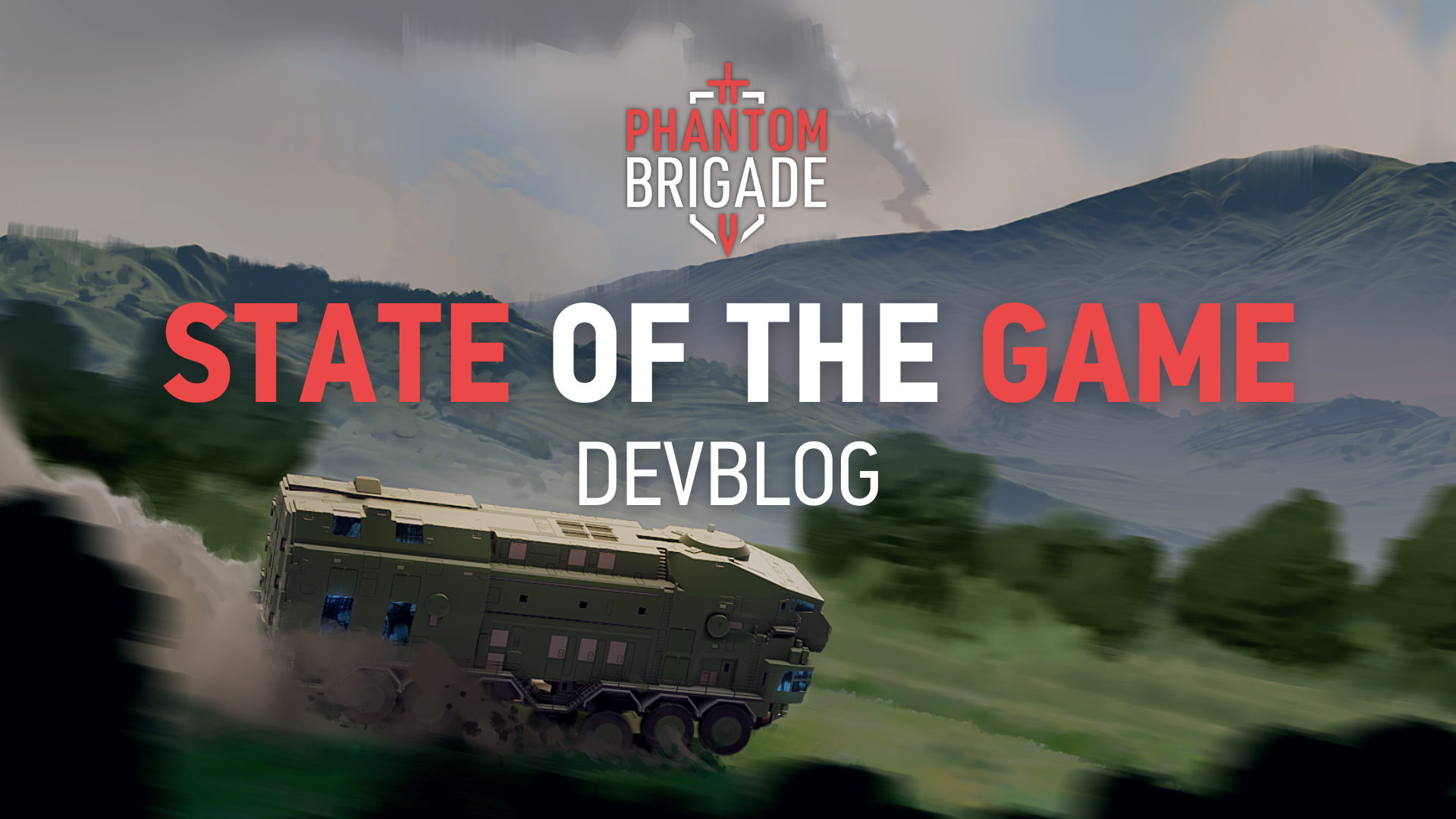 Hey Brigadiers. It’s November again. A year of development has already flown by, and our exclusive early access period with Epic Games is over at the end of the month. We’d like to take a moment to address the mech in the room. When is Phantom Brigade’s 1.0 coming?

Unfortunately, we don’t feel comfortable giving a timeline yet. We have a general idea, but at this point, we would rather wait until we know a timeline for sure rather than give an arbitrary date and end up disappointing fans if we have to keep pushing it back. So while we can’t tell you when Phantom Brigade will hit 1.0, we can share the rest of our plans and what to expect for Phantom Brigade’s full launch. We hope this can give you a better idea of what’s left for us to do!

Before that, a brief reflection on our progress.

When we initially launched in early access one year ago, we had the bare bones of the game in place. We had the scaffolding prepared, and what we’ve been doing since is going through each of the systems and fleshing them out.

Once we felt combat was in a solid spot, we began reworking post-battle salvage, and making improvements to the economy. This included the workshop, crafting, different scenario types, new maps, and more. That said, work for both combat and the economy is not entirely complete yet, so you can still look forward to more additions and tweaks as we carry on. 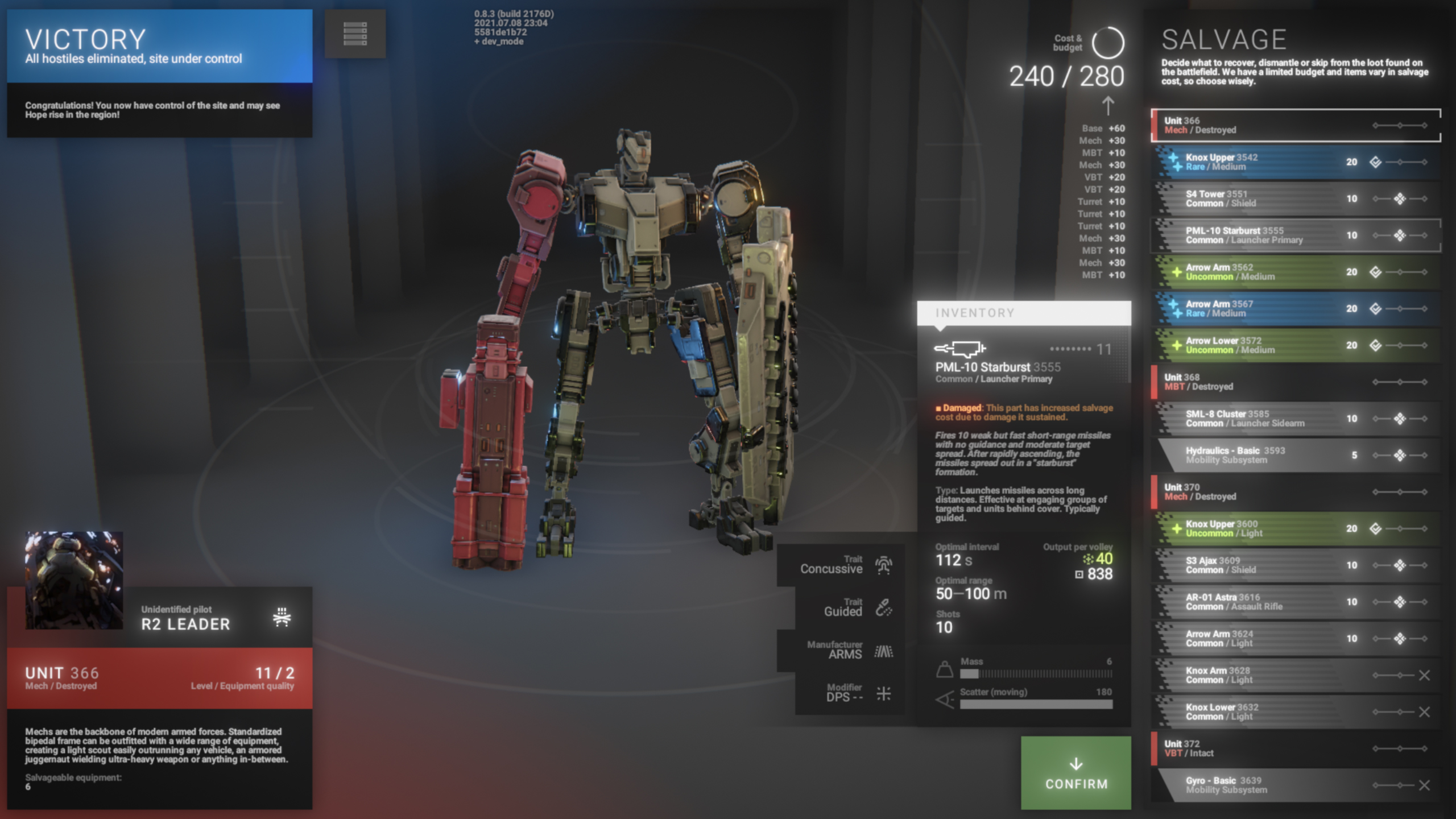 There are 3 “seasons” of updates left, as we’ve been referring to them. The first is an Overworld Overhaul. The next is Pilot Progression, and the last is Polish/Preparing for Steam.

The system currently in place for the Overworld is mainly just an avenue to get from one battle to the next. Our goal with changes to the Overworld is to make gameplay outside battles more dynamic and strategic, and overall more fun over a longer period of time.

The first phase of the Overworld Overhaul is improving the stealth gameplay. We want to capture the feeling of sneaking through hostile territory held by enemy forces. These changes are due out in our next monthly update.  This is something we’ve actually been working on for several months now, so we’re excited to show it to you!

The second phase of the Overworld overhaul is better war simulation. As the Phantom Brigade makes their way through the provinces and gains strength, there should be an escalation of combat. We want more dynamic enemy actions and reactions to your accomplishments. 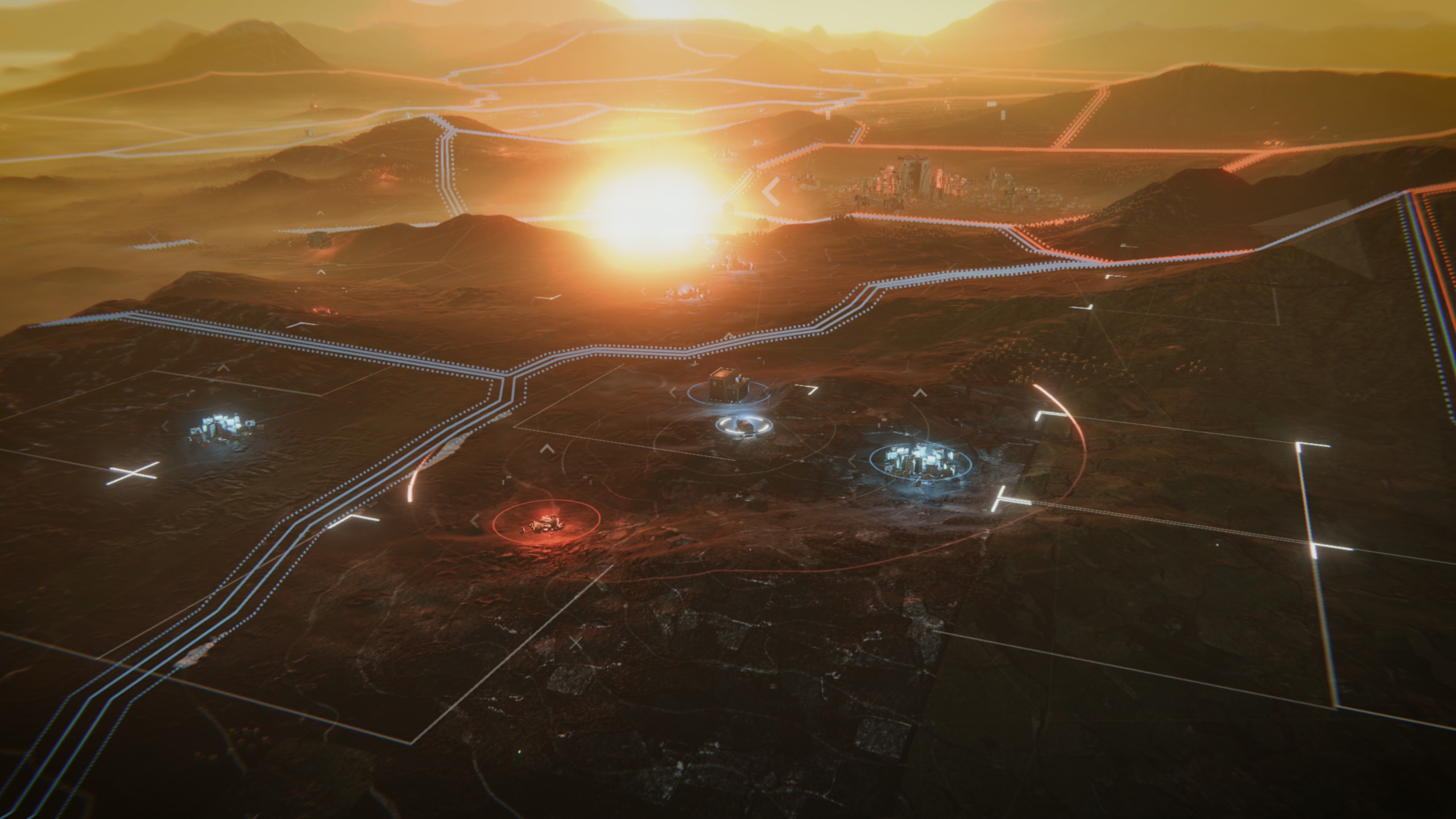 The following “season” of updates will be about Pilot Progression. The mechs feel like mechs, and we want the people to feel like people. We want the pilots, your crew, and the enemy to feel alive with personality and desires of their own. Pilots who win or survive battles should feel more experienced, and enemies who return to fight you should feel recognizable and foreboding.

Lastly, we need time to polish and get ready for Steam. This includes Steam essentials like achievements, trading cards, etc, but we also need time for UI improvements, localization, accessibility features, tutorial improvements, the climactic Capital Fight, and anything else that comes up between now and then.

What about the Replay System?

The Replay System is one of the most requested features, and while it’s something we would very much like to get in, it’s proving to be very difficult to implement properly. We’re exploring different ways to go about it, but ultimately, we don’t want to ship anything in a state that doesn’t meet our standards. We’ll continue to try to tackle this to the best of our abilities!

What does this mean for people who have been waiting for the Steam launch?

Feedback is extremely important to us, and we will certainly want input from new players. Steam Playtests will allow you to try the current state of the game for free during that period and share your opinion with us!

Thank you for your continued patience and support. Keep an eye on our Steam page in 2022 for when playtests begin. You can also keep up with our team and Phantom Brigade news by wishlisting Phantom Brigade on Steam, following our Twitter, joining our Discord, and signing up for our newsletter. We will also have a redesigned roadmap to share soon to better show what we’ve talked about in this post.

You’ll hear from us again soon! Over and out.