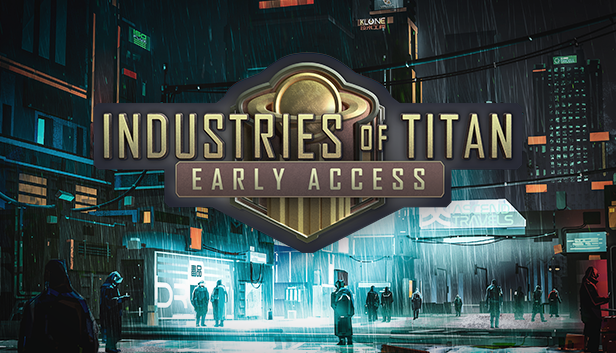 What is Industries of Titan?

Where can I get Industries of Titan?

When can I get the game on Steam?

Industries of Titan will be available on Steam in 2021.

How much will Titan cost?

Will Titan be coming to consoles?

At this time, Industries of Titan will be a PC-only title. We may consider porting to consoles at a later date.

Will Titan be on Linux/Mac?

We do not currently have plans to support Linux or Mac. We may consider porting to Mac and Linux at a later date.

Will there be multiplayer?

Our current goal is to finish Industries of Titan and all its features as a single player game, but we will continue to consider multiplayer in the future.

Is there a soundtrack for Titan?

Danny Baranowsky’s Under Construction OST is currently available on Steam and the Epic Games Store, featuring official work-in-progress, DRM-free tracks that will be updated throughout development. The full soundtrack will release alongside 1.0 of Industries of Titan, after Early Access. It will be on Epic Store, Steam Store, and all major music distribution platforms such as Spotify, iTunes, and Amazon Music. Danny also has some Industries of Titan EPs available on his Bandcamp.

Early Access is a period in which players can purchase and play Industries of Titan early if they would like to support development and help shape its future. During this time, we’ll continue to add features, balance the game based on player feedback and further polish the game.

Early Access allows us to get your feedback as early as possible so we can make Industries of Titan the best game it can be. We’re bursting with ideas and want you to help us shape the future of the game.

How long will the game be in Early Access?

We are currently planning on having Early Access last for one year.  However, this could change if we feel like the game is not ready for a full 1.0 launch after a year.

How are you planning on involving the community in your development process?

Your feedback will shape the future of Titan! We’d love to hear your feedback and there are a few places you can reach us to do that. You can find us on Discord, head over to our Forums or find us on Twitter. Alternatively you can also contact [email protected].

Frequent updates will mean that older saves will likely not work with newer versions. We understand that this may be frustrating, but the nature of Early Access and adding features means that this is regrettably unavoidable.

How often will you be updating Titan?

We will try to release smaller content updates every few weeks on the Experimental Branch, with bigger gameplay features coming to the Main Branch on the first Tuesday of every month (called Titan Tuesdays). Different features require different amounts of time. The bigger the feature, the more time we need to implement and test it before we can release it.

You can always find the latest version of our roadmap here. For comparison to see how far we’ve come, click here to see the very first version our first roadmap!

What languages and regions are supported?

Will there be controller support?

No. Due to the nature of gameplay, the option to support controllers would require a massive overhaul of the game’s UI.

Will there be support for custom key bindings?

We support custom key bindings for Mouse and Keyboard.

Will there be mod support?

We really love the mod community and definitely want to support it! Mod support is a surprisingly big project to undertake, and we still have a lot of the game to finish. So we can’t say for sure when or in what form mod support will exist, but we are certainly keeping it in mind for the future.

Yes, Industries of Titan is DRM-free.

There’s nothing but a black screen when I launch the game! I can hear music and see the in-game mouse, but nothing else. What can I do?

If you can’t see anything when launching the game, there is a very high chance you are running Windows N. You will need to download the Media Feature Pack from Windows here. This should allow you to play the game. If you are still having issues please feel free to contact us on Discord or via email.

Who are Brace Yourself Games?

Who is working on Industries of Titan?

Led by game designer Andy Nguyen (Monaco: What’s Yours is Mine) & Ryan Clark (Crypt of the NecroDancer), art from Sir Carma and Nick Gunn, and music from composer Danny Baranowsky (Crypt of the NecroDancer, Super Meat Boy), the team behind Industries of Titan is creating a new take on the strategy simulation genre. Click here for full game credits.

How long has Titan been in development?

Early prototyping of Industries of Titan began in early 2017, with full production starting in February 2018.