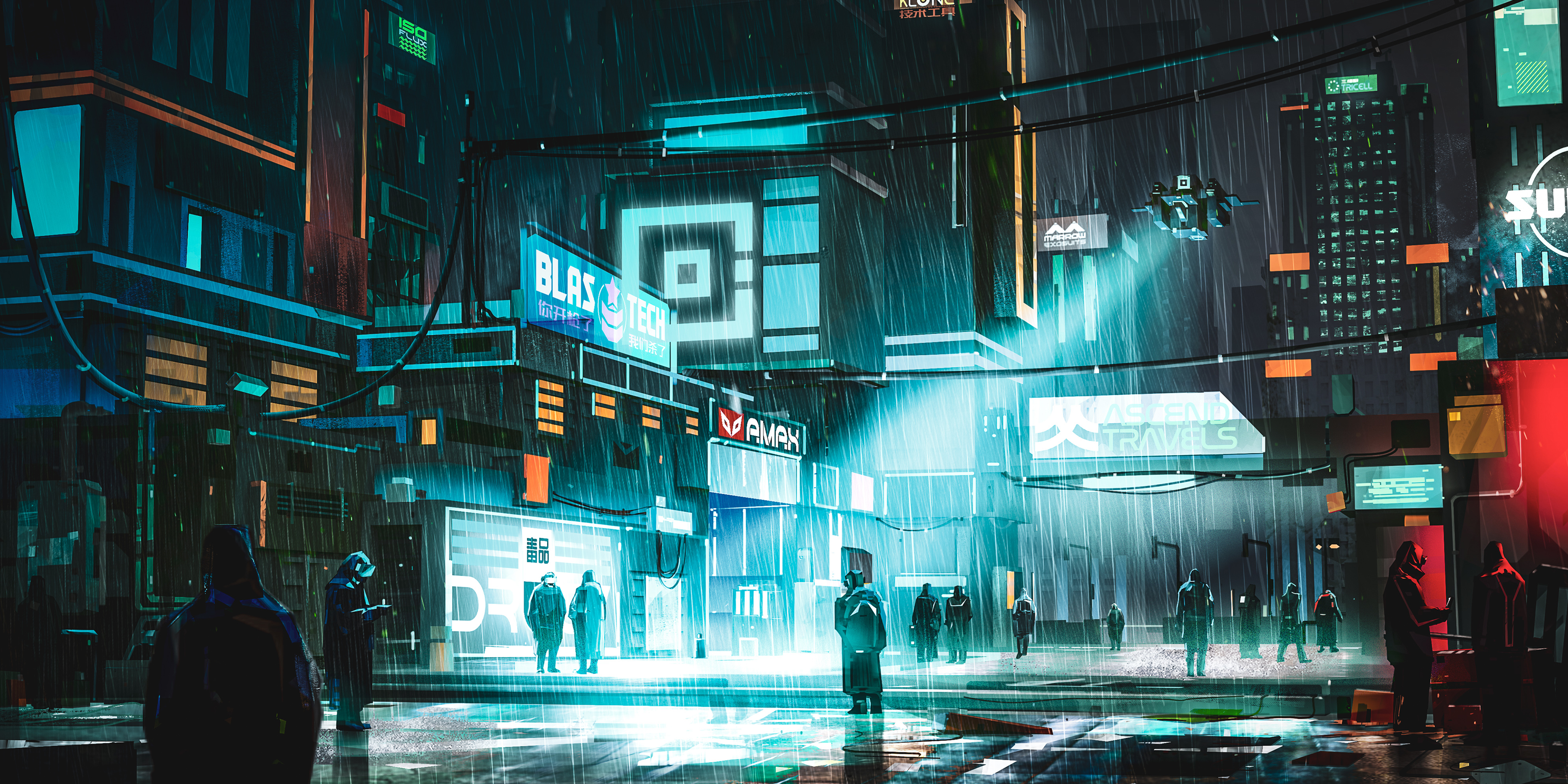 On April 14, 2020, we released our first Early Access version of Industries of Titan out into the world. Our very first update added the Transport Hub and roads into the game, which, looking back, was very appropriate because we had a long road ahead of us.

Part of the beauty of Early Access is that we get to build towards something together with you. There is also a level of chaos in that we are building the road while we’re driving on it. We are drawing the blueprints, preparing the foundation, pouring the cement, and paving all at the same time.

But after over two years of experiencing all the fun twists and turns of Early Access development and monthly updates, we’re finally ready to announce a 1.0 timeline.

What does this announcement mean? This means that it’s time for us to start making some final decisions about what will be in the game.

We’ve had some pretty steady goals in our roadmap over the last few years, but thanks to your feedback, we’ve realized a couple of things in particular:

Now, as we get close to our 1.0 launch, we want to make sure our remaining roadmap better reflects our updated vision. Our goal with this devblog is to talk a little about what we have left to do before 1.0 and tell you about some of our bigger pivots, including a new Campaign Mode, Starting Bonuses, and more. 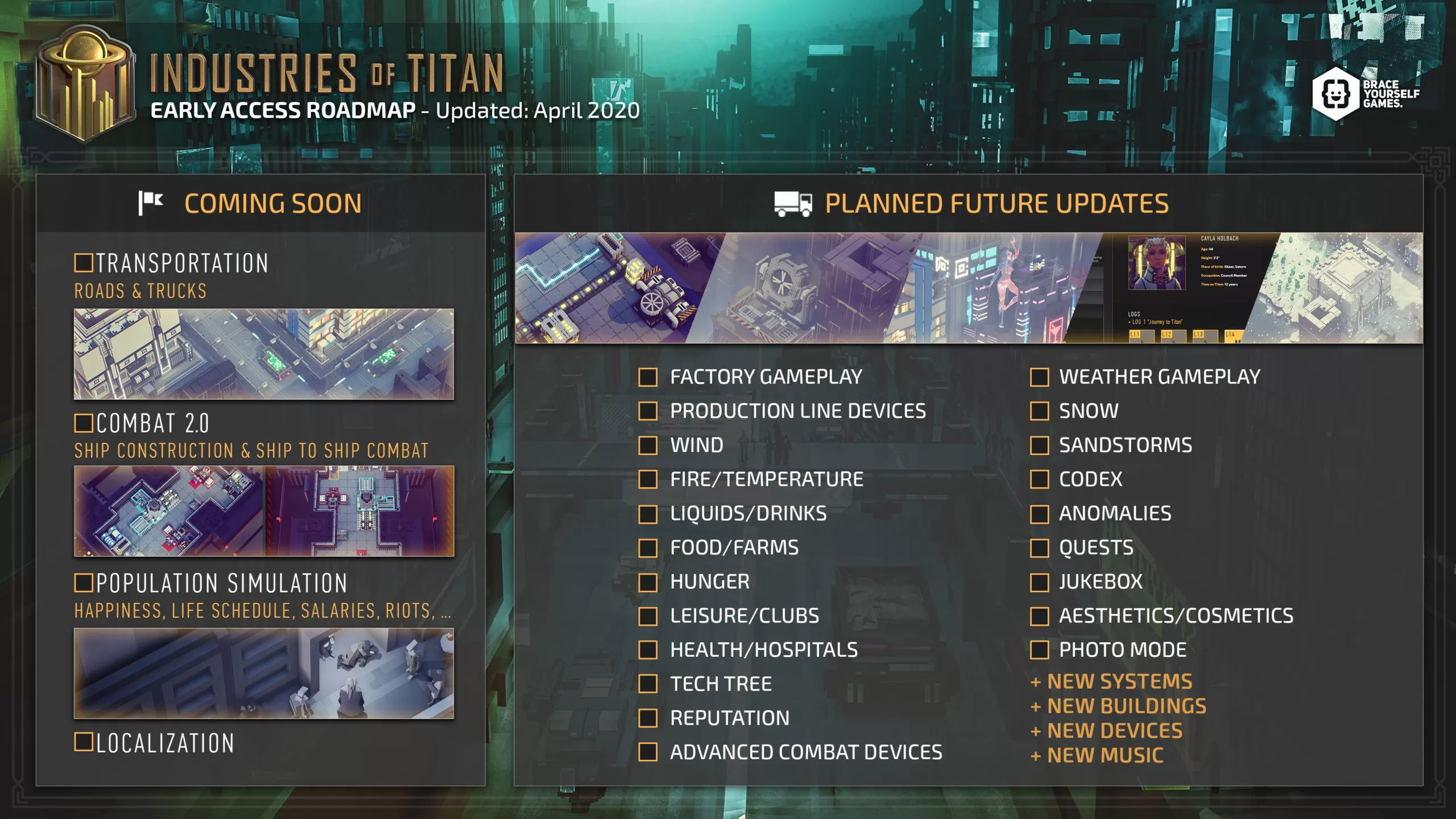 Our very first roadmap image from April 2020. What a throwback!

First of all, let’s talk about the main goals we still want to accomplish in a very broad sense. These are the general umbrella things we want to achieve after listening to your suggestions.

From the beginning of Industries of Titan, we’ve known that we wanted players to compete against other rival corporations. We started with ‘Eliminate All Rebel Encampments’ as a placeholder condition for victory in Early Access, and it was that way for a long time until we introduced Corporate Goals just earlier this year.

This was expanded upon even further in our last update, which introduced Rival Corporations to compete against. We will continue to iterate on both corporate goals and rivals by

The final piece of the puzzle is CAMPAIGN MODE. 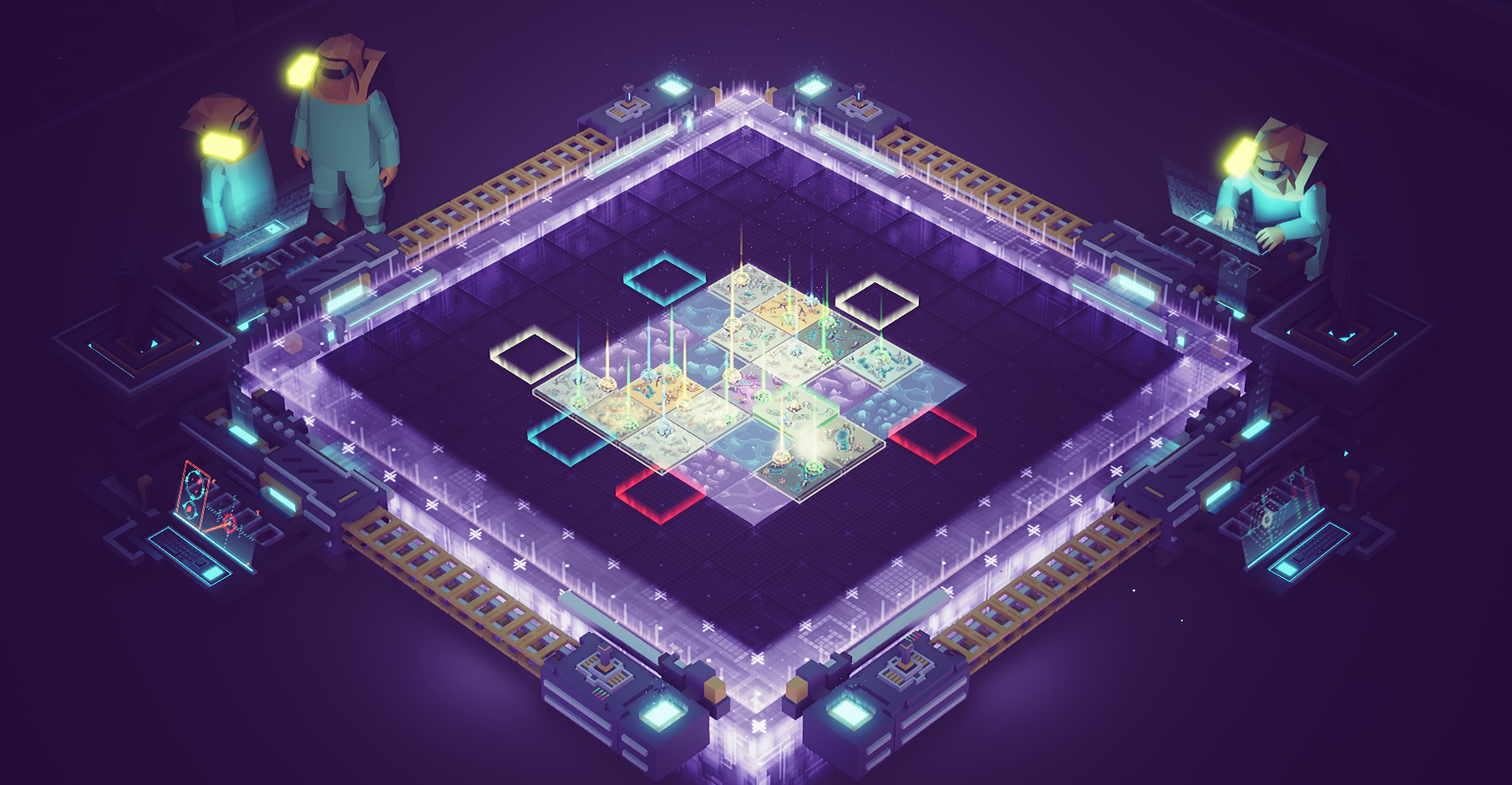 Campaign mode is one of those weird suggestions that, when it was first requested by people early on in development, we weren’t sure it was something we wanted to do. But the more suggestions we received, the more we realized that a Campaign Mode would be able to accomplish many of our objectives around player purpose.

Campaigns will help give players a more concrete goal than just ‘expand forever.’ It will also introduce unique challenges per playthrough, which will require players to try out different tactics. That brings us to our next goal.

We learned by chatting with you throughout Early Access that replayability is very important to you, which is great because replayability has been a goal at the forefront of Titan’s development since its inception. We keep replayability in mind at each step, encouraging people to try new strategies.

At this point, because replayability is such an important factor for us, a lot of the key features in replayability (map types, corporate goals, the tech web etc.) are already in the game. Our plan is to add to and iterate on these features.

There is one aspect of Corporate Goals that we haven’t discussed yet though, and that’s Starting Bonuses. 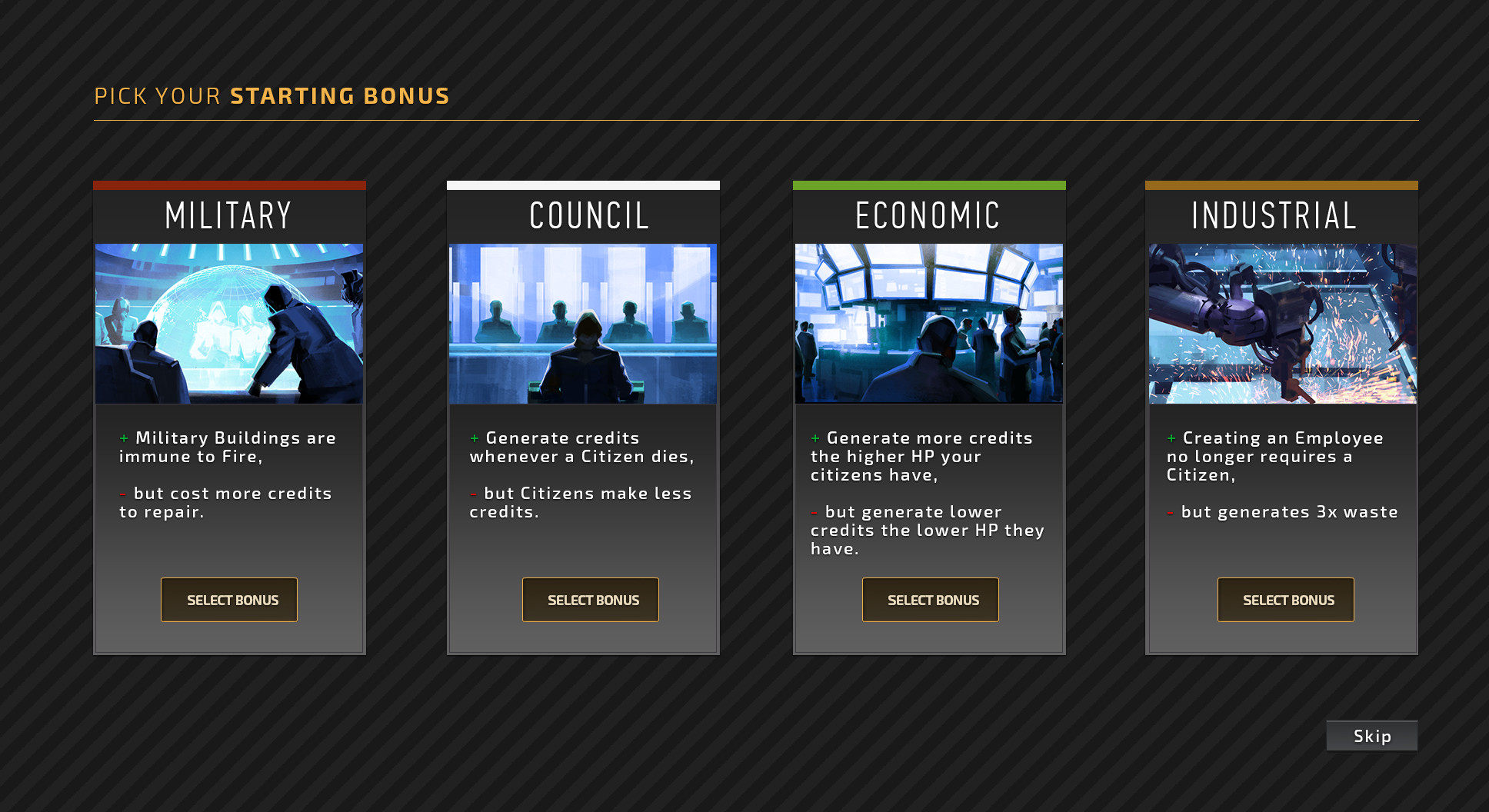 First look at the Starting Bonus selection screen. This is still a work in progress.

Starting Bonuses are powerful traits that you can choose at the start of each campaign mission or scenario that will give you a unique advantage for your playthrough.

Previously, when you started a game, you were asked to select a Faction to play as. Our original intention was to provide players with a number of different Factions to choose from that would each have their own strengths – be it military, economic, political, or otherwise. When we introduced Corporate Goals, we realized those goals provided enough incentive to play differently.

Starting Bonuses are almost exactly what we wanted to do with Factions, except that we can provide many more unique variations of Starting Bonuses than we can implement different Factions.

An important factor in Titan’s design is that we wanted all buildings (and devices) in the game to have a specific, functional purpose. Nothing is purely aesthetic. That said, we know people want more buildings for their cities. With that in mind, there are several more buildings you can look forward to that will make your city more robust:

Work in progress art of Hospital and Park buildings.

We’ve also listened to feedback on buildings in the Tech Web. Currently, non-essential buildings are locked behind research. However, because of your feedback, and because we’ve also added a lot of new technologies since the Tech Web was launched, we’ll be taking buildings out of the Tech Web so that you can unlock the Council Obelisk, Energy Storage, Fuel Storage, Air Purifier, and Industrial Fan buildings with credits any time during your playthrough.

To say Titan has a lot of moving parts is a bit of an understatement. The game has to keep track of all your citizens, your employees, their jobs and priorities, Xethane levels, pollution, credits, resources, incoming migrant ships, rebel attacks… you get the idea. With the most recent update, the game not only has to keep track of all this for you but for your rival opponents as well.

It can be pretty intensive on some computers, so we want to make sure we take the appropriate amount of time to address this before adding more. You can look forward to many optimizations in the upcoming June Titan Tuesday. 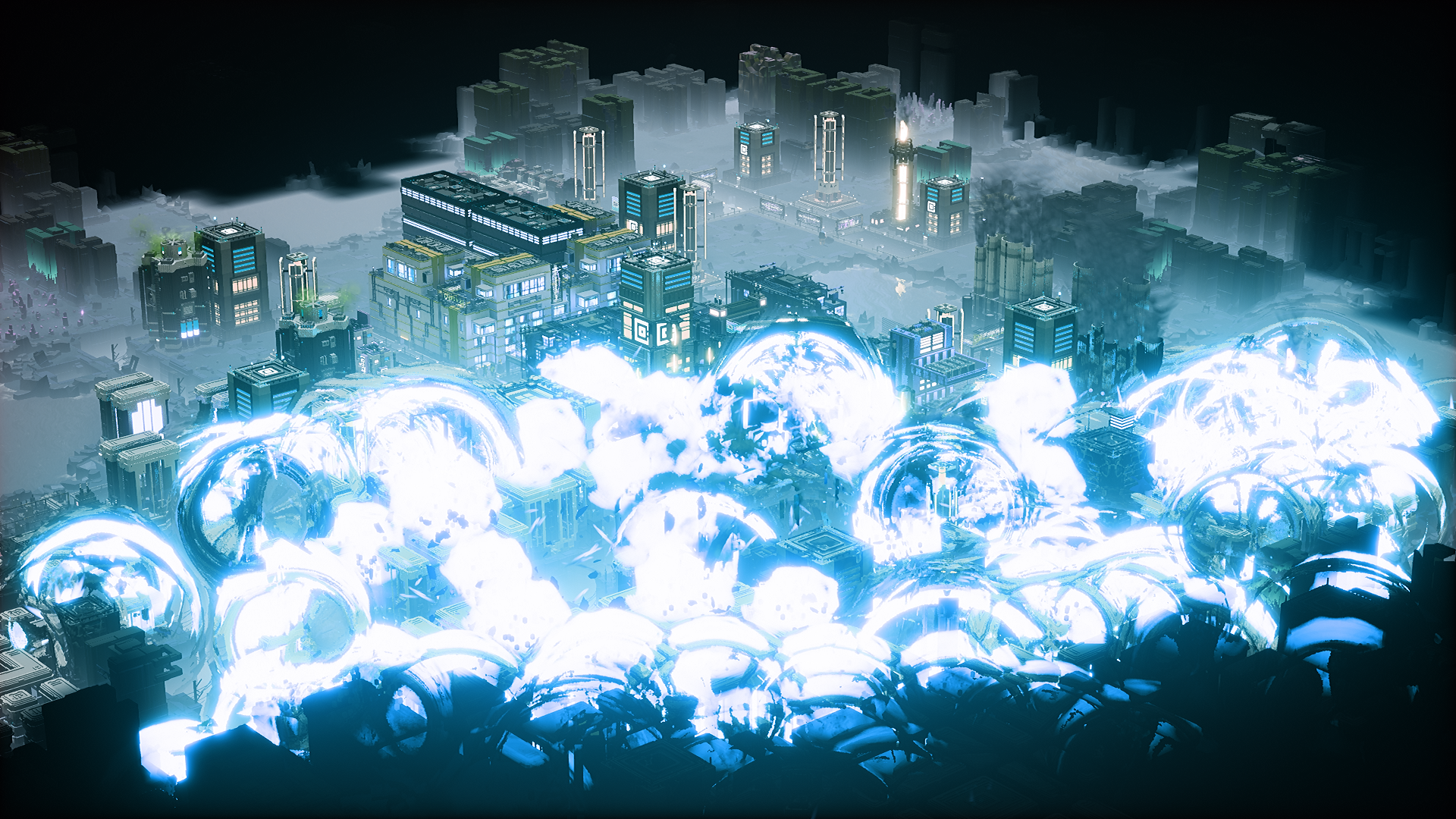 Exploding city image from one of our moderators, Satoru.

There are also always quality of life features that can be added. For example, things like tutorial prompts, or clicking through the rebel attack banner to take you to the building being attacked have been long requested features that we would like to get to soon.

Lastly, while the vast majority of our roadmap will be in the 1.0 version of Industries of Titan, there are a couple of things that we’ve had to trim, and we want to address that. With 1.0 coming in November, we’ve rank-stacked our new and remaining features against the time we have left, and we’ve decided to cut these two features:

We believe, among our remaining features, these two items bring the least amount of depth, and by trimming these, we can spend more time and effort on the features you care about the most.

We are also still revisiting combat to try to address feedback on the combat system.

Industries of Titan 1.0 is coming this winter, so we wanted to share an updated roadmap with you. We’ll continue to iterate on:

We added a few big new features to the roadmap:

When you work for years on any single project, you learn a lot along the way. Games development is no different. Whether it’s processes, design, or even communication, you learn that just as many things don’t go according to plan as they do. It’s important to be adaptable.

So once again, we thank you for being a part of this long, wild road trip of a game with us, and helping us shape the 1.0 version of Industries of Titan, which we’re excited to bring you this winter!

On that note, here is our updated roadmap list. 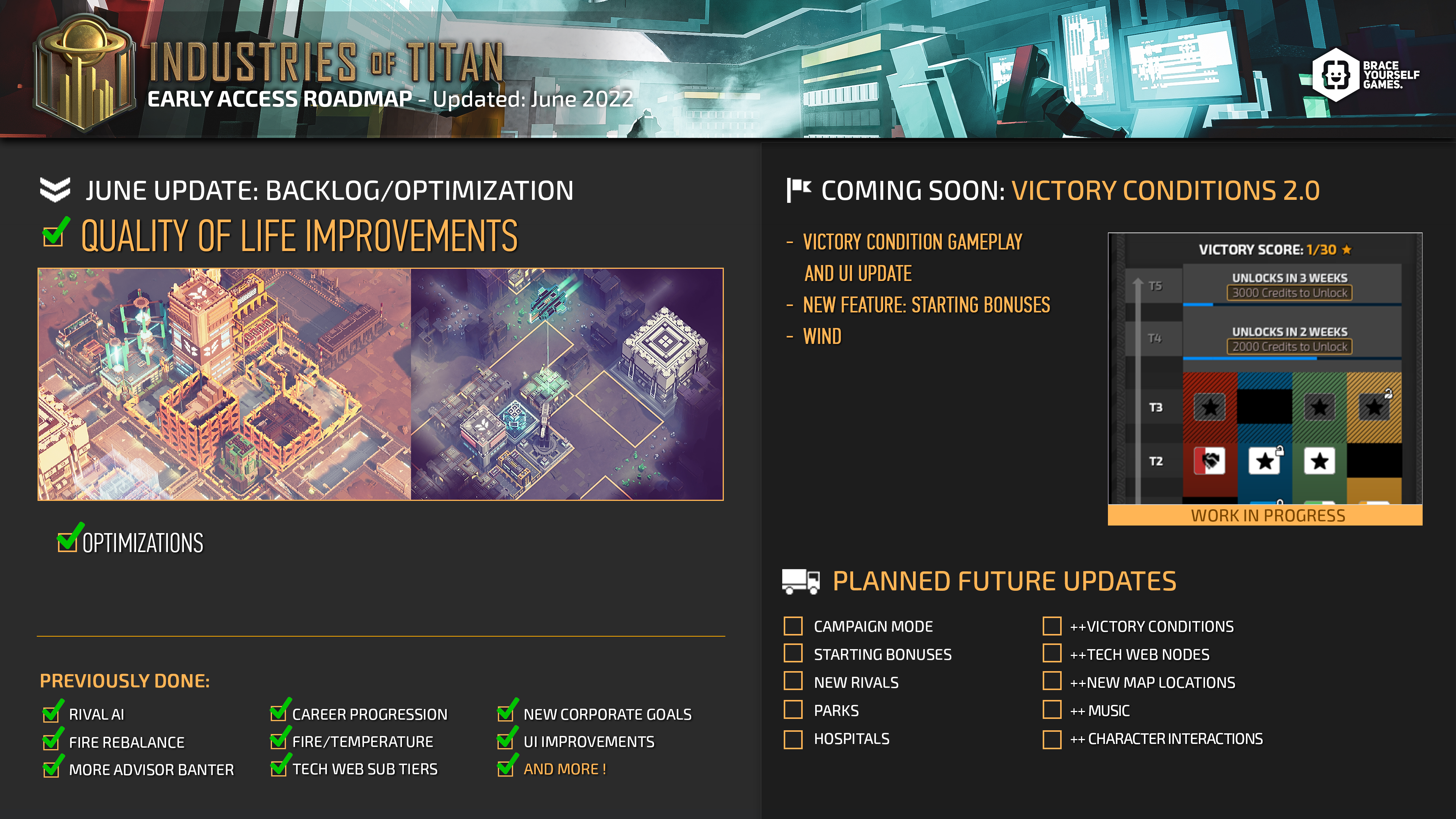 We’ll see you next time, Founder.

Maddie & the Brace Yourself Games team