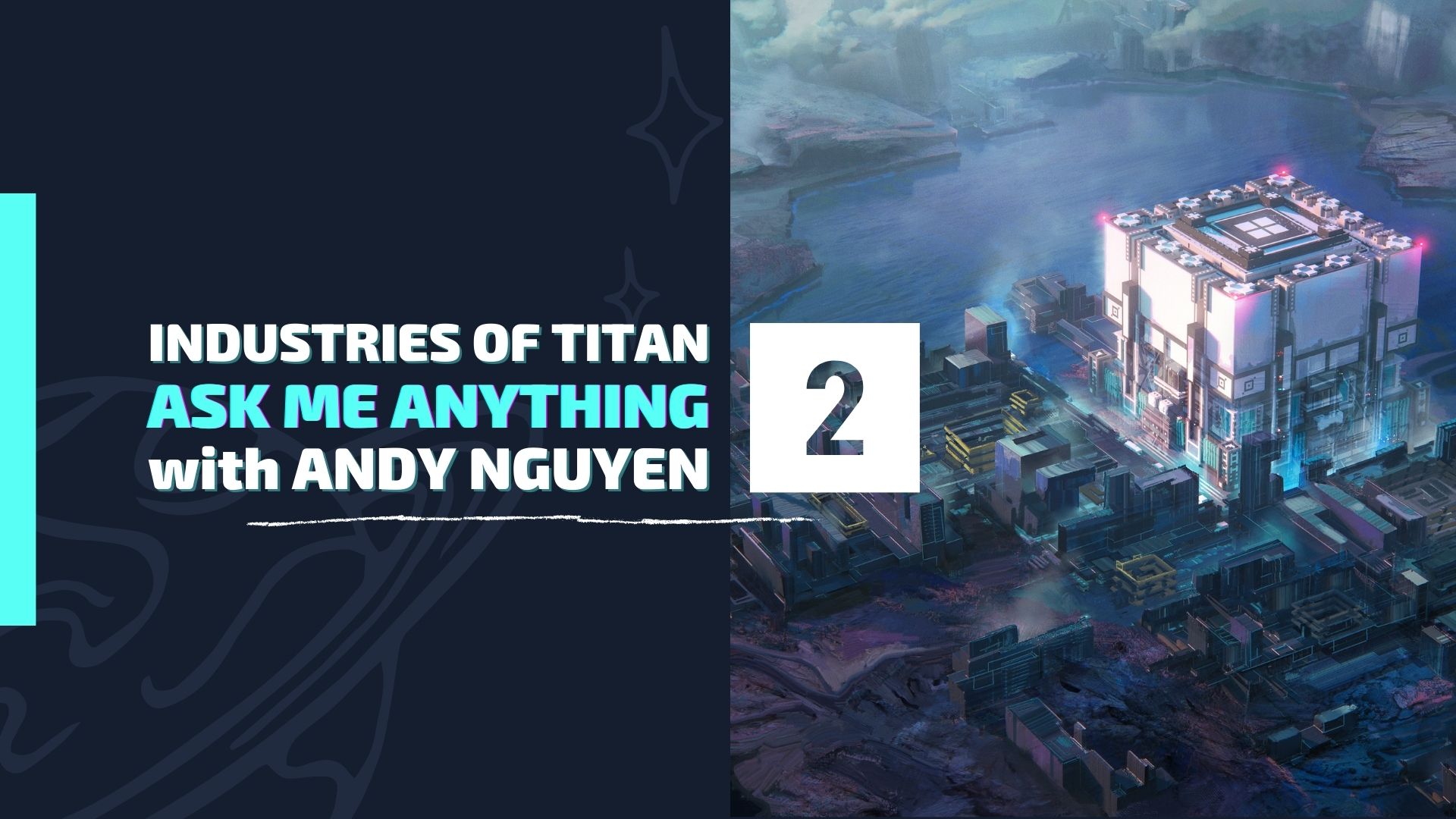 Every Friday for the last month, Industries of Titan’s Lead Designer, Andy Nguyen, has joined players in our Discord to answer all your community questions! If you have questions of your own, go ahead and leave them in the #titan-ama channel, and Andy will answer in the next AMA! The dates of these AMAs were November 13 and 20, 2020.

How many factions will the game see when it goes in full release?

Internally, we have lore for several factions, and the goal was to add them over time, whether it be during EA or after 1.0.  Sorry, I can’t give an exact number because it’s difficult to estimate the time it’ll take to implement them since they are in various stages of development.

Our plan for each faction is to make them feel like a unique way to play the game, as well as reveal a unique aspect of Titan’s Lore. Because the gameplay for them will be unique, it will take some time to develop and we are currently focusing on adding gameplay systems that affect all factions.

How different will be the new factions in terms of gameplay?

The faction’s gameplay will be driven by their lore, which we are keeping secret for spoiler reasons for now. I can give a rough example of how we would approach faction design though. This is just an example.  We would start with the factions defining culture and motivations. So, let’s imagine we had a faction that felt like Crevices were a primary part of their culture and sacrificed Citizens by throwing them into the Crevices to worship some unknown entity.  This would affect gameplay because the population growth loop would change.  Citizens are now a currency to satisfy some criteria. So we would have to balance the gameplay for this new behavior, and add new UI.  It would require some unique buildings to facilitate this behavior. Each faction will also have unique ships interiors and exteriors.

If they were a faction that didn’t work with the Council, then Influence as a currency wouldn’t be applicable which changes how terrain is acquired, and how migrants are obtained, etc. If it was a faction that posed no threat to the Rebels, then Rebels would treat them differently. These are the types of changes we are aiming for when coming up with a faction. The goal is to view the world of Titan with a unique set of eyes.

What is the intended gameplay vs rebels?

The Standard Game mode as you see currently, is not an accurate representation of our long term goals. We need to add Rival Corporations on the map, for which you compete or cooperate with. We need to give you several options for goals and victory conditions.  The primary objective of the Standard mode will be about your competition between other Corporations, not just the conflict with Rebels. When this happens, the victory condition of defeating all the Rebels will no longer exist.

In the long term, Rebels are supposed to represent one of the third-party factions, similar to the Council. They will have their own Standing with your Faction, which will affect how they treat you. They will be just one of many ever-changing entities on Titan that you must deal with.

The current system with Rebels exists the way it does because we have not incorporated Rival Corporations, Reputation, and Victory conditions.

Can we rebel against the council?

Sorry, but I can’t give you further details about this at this time. The Council would be very upset with us.

Will Rebel camps grow in size as well if more citizens join them?

Yes. Rebel camps will be given a pass at some point to make them feel more alive and reactive to your gameplay.

Will players ever be able to walk around their own city, as if they are a citizen?

How exactly will in game Money be generated and for what will it be used?

Currently, Citizens watch ads and you get money directly.  This will not be the case in the future.   In the long term, the acquisition of credits will be more indirect, and more related to the management of your Citizens.  In the future, money acquired from watching ads will go directly to the Citizens and be part of their personal wealth.  The player will then have to find methods to extract money from the Citizens.  There will be no taxes though!  Instead, you will earn money by charging them health care premiums in order to have access to hospitals.  This might mean you may intentionally allow pollution to form to encourage your population to get health insurance.  You will also charge them rent for using your Residential Buildings.  Over the course of development, we will add more methods extract credits from Citizens, but you will have to balance it with their Happiness.  If they feel like you are treating them unfairly, they may no longer want to live in your City.

Credits will be used primarily to pay for your Employees Salary.  Employees themselves are mindless drones, so the money you pay will be transferred to their family’s for the loss of their loved one.  Failure to pay the salary will result in Citizen unhappiness.

How will citizen growth work? Will they just migrate to your city with ships or will they grow also naturally and maybe migrate from other city’s?

We currently only have plans for Citizens coming into your city via migration, and possibly reproduction. Stealing Citizens from other cities has been briefly discussed, but it will be very dependent on how the Rival Corp simulation turns out, since it would be those cities that you are stealing from.

Will there be something like a police force to detain citizens that makes trouble?

We currently do not have any plans for policing through traditional police forces. We do have plans for other methods of coercing your Citizens into behaving.  Policing is a very old technique for controlling Citizens and it’s very ineffective and expensive. This is the future! We can do better than that.

Will we be able to sell the products that we are producing outside of our city or outside of titan?

We currently have plans for a Store building, but that is only for within your city.  Eventually we hope to let you manufacture consumer products and sell them to Citizens for money.  Regarding Off-World, we have had discussions about off-world trade, but that system has not been fully designed yet, but it does have supporting lore.  We know that there are functioning colonies outside of Titan and in the future, it would be nice to interact with them somehow.

How many different products will be in the game and will be more resource types ?

There will be more resource types for sure. They will be typed to the Factory gameplay. It is too early to talk about how many products we will have.

Will we ever be able to have high level orbit combat?

Currently, this is not something we are discussing. Combat is for now going to be in the scope of low level orbit on Titan.  However, we have had some discussions about how to expand the world’s lore for what happens off Titan. We already get hints of this through the Migration System where people travel from Earth, Mars, and other planets in the Solar System. We want to continue to explore that aspect of the world in the future.

Will there be more vehicles/buildings that we, the players, could freely customise?

For vehicles, we currently only have plans for Trucks and Civilian vehicles. We have concept art for other types of Vehicles, like the Train concept that was shared in WIP Wednesdays, but this is currently just a concept. We do plan to add many more buildings over time, as City Building is a key aspect of Titan. Regarding customization of vehicles and building, we are having internal discussions about this, but we cannot share more information at this time.

Will there be missiles and anti-missile defenses at any point to complete one of the traditional sci-fi weapons trifectas (missiles, projectiles, & energy)?

We plan on having different ballistic weapons, energy weapons, and various defensive devices to specifically counter those types. These are in various stages of development so I don’t want to spoil anything here

Will there be EMP-like weapons that temporarily disable systems without actually damaging them?

We intend to have something like this, but it is important that we countermeasure devices so players can do something about it.

Will there be some sort of drone control device that can be used offensively or defensively?

We intend to have something like this as well.

Will there be other combat-focused, non-weapon devices like boarding ramps/teleporters for employee-on-employee combat, cloaking, or remote hacking?

We have several combat-focused, non-weapon interactions in various stages of development. I’d like to keep them a surprise for now.

Sorry I can’t be more specific! The more I talk, the more it’ll make the wait agonizing I think.

There’s still a lot to accomplish and we don’t plan on supplementing Combat for a while because we are still missing core gameplay systems and we had just done 3 months or so of combat. We have a lot of ideas for Combat, so it’s not the last we will see of it yet!

Will there be a campaign mode?

Our main focus regarding single player is a replayable sandbox/skirmish mode, similar to 4X games like Stellaris and Civ, rather than a set of scenarios or levels that you complete in sequence. We do have plans for alternative ways to play the game instead of just Standard/Survival/Zen, however none of the alternative playstyles will be a linear level-based campaign.